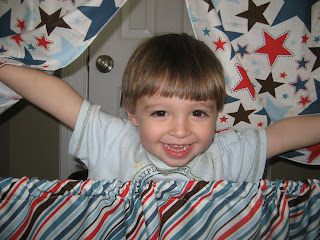 I have been wanting to make a portable puppet theater for some time.  I bought two tension curtain rods at target (for about $3 each) a while ago and figured it would be really fast to make (acquiring materials for a project never seems to be what holds me back - I love the shopping part!).  I also had a few yards of Riley Blake All Star fabric that I bought for a quilt about a year ago that ended up being the wrong color scheme. I finally mentioned the idea to the kids yesterday and after much pleading we put the whole thing together this afternoon, after it became very clear that no one would be taking a nap. 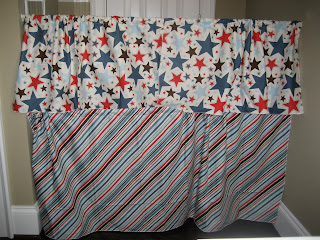 I was thinking I'd do a tutorial, but I didn't want to insult your intelligence. The theater is basically 3 rectangles.  I finished the edges using a rolled hem on my serger, but you could do it by ironing the edges under 1/4" and then another 1/4" and sewing. To measure for the rectangles I had my kids sit on the floor, arms up with puppets to see how tall to make the bottom panel (panel A) and measured the doorway we planned to use it in for the width (I added about 6" to that number to make it ruffle a little - plus you could use it in the future on a wider doorway).  For the top two panels (B & C) I made them a little shorter, but used the same width.  For all three panels I folded the top edge down 1.5" and sewed the casing for the rod at 1.25".

After playing a little while I realized the top curtains were not staying open on their own, so I added a length of ribbon, tacked on about halfway down the curtain on the outsides of panel B & C. 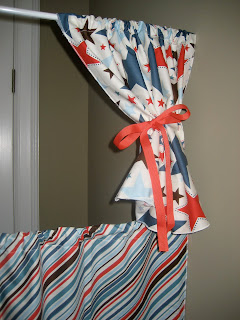 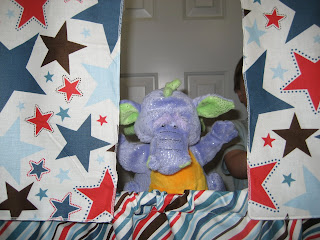 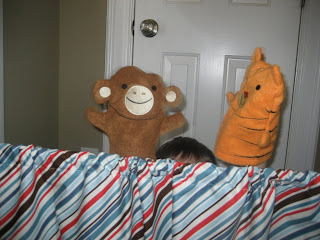 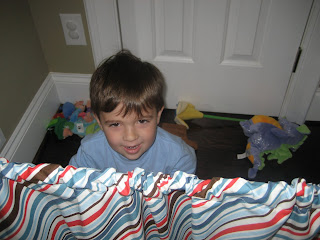