I finally got my nerve up to attempt the Anna Maria Horner Socialite dress pattern.  I bought some Echino cotton/linen blend fabric in Eggplant and I am very happy with the drape of the dress.  I've been trying to find more cotton/linen blends to make another. 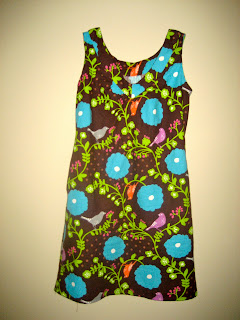 I was worried about all the facings (on the armholes and around the neck opening) and really excited about the pockets.  All of these little features were described beautifully by AMH in the instructions.  Not confusing at all.  And I am very proud of how pretty this dress is inside. 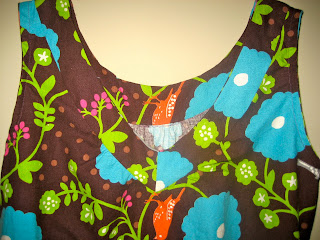 I have a pear shaped figure, unfortunately, so I tend to do better with things that have a defined waist so I was a bit worried about this dress.  I did add some darts to the back, as it just seemed like an awful lot of fabric back there. It's not the most flattering thing I own, but it's not horrid (at least I hope not!) and it is so comfortable.  And it has pockets!  And it is a cool summer dress that does not require uncomfortable undergarments (I am not a fan of strapless bras). 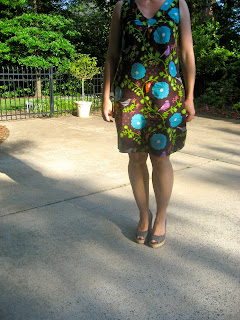 In other news, Jack has been playing with his Dry-Erase Quiet Book non-stop and even took it to Show & Tell today.  He's not big on working on letters or drawing much, but the magic of dry erase is proving irresistible to him.  Success! 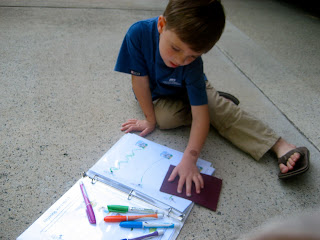 And, on the cutting table: 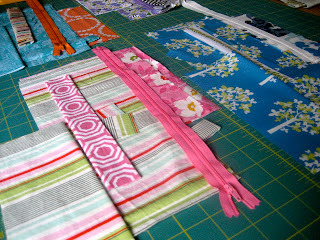 Some of you that spend time in crafty blogland probably know what these are destined to become.  No fears, I will reveal the finished product, hopefully, sooner than later.  I am going to attempt an assembly line production for these.  I'm not big on that (despite having worked for Ford Motor Company), so we'll see how it goes...
Labels: Anna Maria Horner dress pattern review pouch selfish sewing zipper