So this week was rather frustrating, as far as sewing goes.  We recently remodeled our kitchen island to give us some seating space.  I pulled our two ikea barstools out of the attic and the idea was to get two more.  Then I would make slipcovers with laminated fabric because the kids were getting the white twill ones dirty much faster than I could keep up with washing them.  Yeah, they're washable, but to look presentable they would have to be laundered after every meal!

I was inspired by the ones Dana made with oilcloth here.   I emailed her (she is so nice!) and she told me she cut an existing cover up to make a pattern and that each chair took about a yard of fabric.  I found some Nicey Jane laminate and cut up a cushion. It wasn't too bad to make the first one, so I cut the pieces out for the second.  These barstools have velcro all on the underside and so it is quite thick, plus the laminate sticks to your presser foot.  I covered the underside of the foot in painters tape - have seen this tip a lot. 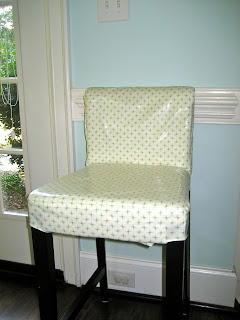 The problems began to arise when we went to Ikea to buy two more.  My husband and I simultaneously put them together, finished at the same time, put them around the table & I couldn't believe it - they were a totally different scale!  The seats were deeper, wider and taller!  Andrew suggested putting matching pairs on each side, but that didn't work either, they were just so different.

We took them apart, fit them back into the box and returned them.  Now we're on the hunt for 4 new ones.  I can't do 4 of the newer style Ikea ones.  I just can't bring myself to make another cover, plus now I don't have enough fabric!

Last night I finally put the other one together so we at least have two in the meantime.  I was having the toughest time.  One of the side panels I traced on the wrong side no less than three times.  So I had a mirror image of the piece I needed!  Crazy!  It was so hard getting the laminate and velcro through my machine, even with the painters tape, so I kept raising the presser foot and it wasn't helping.  Probably because, I realized this morning, I was actually making the presser foot lower, not higher, ugh!  Anyway, glad it's over and I am glad no one has to see a chair like this in my house any more: 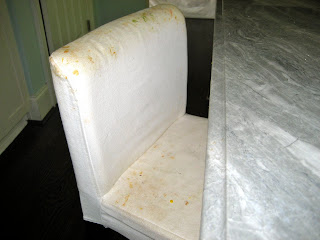