We are set to head out of town this weekend on a beach trip with Andrew's family.  His grandparent's are celebrating their 70th Wedding Anniversary & we are prepared to celebrate this monumental occasion accordingly!  It also happens to be Andrew's birthday the day we get to the beach.

I made him this (I am fairly certain he never reads this blog, but I guess I'll find out if I'm wrong!) following this tutorial almost exactly (why can you see threads in pictures that you can't see in real life?): 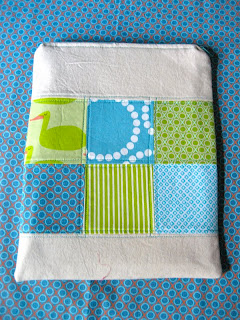 Except the back.  There I embroidered a drawing Jack had made a few weeks ago.  He made it for his Dad and Andrew loves this little doodle.  It's one of the first "people" Jack has drawn.  Jack is really great at the numbers/math/logic stuff, but has been a little slower to take off in the areas of drawing and writing (mainly because he grips the pen with a fist and refuses to hear of an alternative). 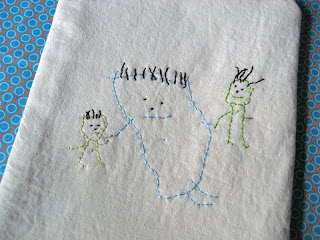 I love all they have all the necessary features & appendages:  eyes, nose, mouth, hair, legs, arms & belly-buttons.

The inside is Anna Maria Horner x&o's in green from Loulouthi. 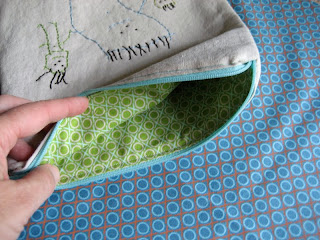 In addition to the case (and the big surprise of what fits inside), I am also making a big birthday dinner and transporting it to the beach.  Most of my time lately has been in the kitchen making big trays of pasta and goodies like cakepops.  It's been a rather tiring week.  I hope to relax at the beach with a lot of the work done ahead of time. 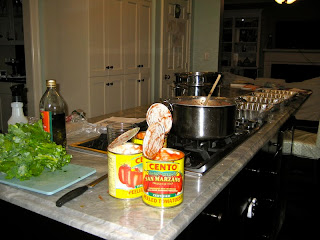 And, in garden news, we had a huge deluge of rain last weekend.  Something like 8-9 inches in a matter of a few hours in downtown Charlotte.  It was a peculiarly soggy week before that, so after the storm our yard was practically under water.   All of my squash & cucumber vines rotted, although I was fortunate to have this one make it: 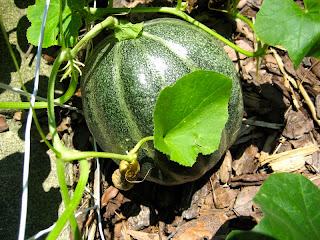 My vines became so entangled it was hard to tell where each portion started from, much less which seedmarker it went with.  I would have though this was a watermelon, and, indeed, I planted watermelon seeds, but one of the rotted vines had this same melon shaped fruit and I cut it open out of curiosity.  It was pale, almost white, inside and smelled strongly of cucumber.  I'm wondering if it goes through some last minute watermelon transformation, or if it is the oddest shaped cucumber ever to grow.  We'll see how this one turns out.


The one eggplant that thrived has been delivering a beautiful purple-black, glossy eggplant about every 4-5 days.  We've been devouring them.  Almost ready! 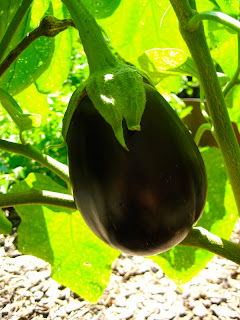 And the tomatoes seem to come in such spurts.  They are green forever and then all turn red at once, which isn't a problem, I could eat a million!  It's just the waiting part.  They better wait until I get back from the beach, but they probably won't. 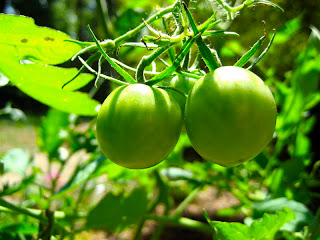 I actually planted some more seeds today.  The vines that rotted left some big gaps in our raised vegetable bed and I figured what the heck.  I know it's awfully late in the planting season, but I already had the seeds, available earth and we do have a pretty long season here in Charlotte.

Hope you are enjoying your week!