Yesterday I saw this pin and I just knew I wouldn't be able to think until I had my own set of Christmas coasters.  I actually have the same darling print, but I decided although I may do an exact copy at some point later, it was too late in the evening to deal with bindings.  So I went to my second favorite Christmas fabrics.

Last year I bought a layer cake of a fabric line called The 12 Joys of Christmas by Sheri Berry for Northcott Fabrics.  So cute, like the 12 days of Christmas, but with cups of cocoa, Christmas records, and paper snowflakes.  There are also quite a few nearly solids with snowflakes and such on them. 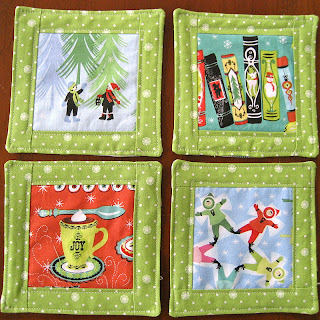 I was able to cut up one 10" square for the framing & then fussy cut a few of the prints.  I just sewed these right sides together, turned them and topstitched to avoid binding at almost midnight.  I backed them in the print that actually lists out the 12 Joys of Christmas. 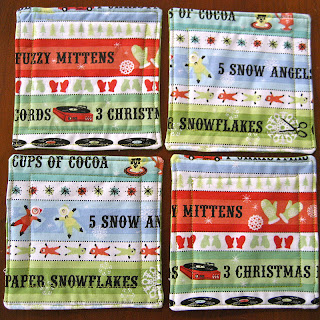 Despite the late hour could I stop there?  NO!  I was having way too much fun getting into the Christmas spirit.  I started two large blocks that may eventually became one reversible pillow or a pair of pillows.  I'm envisioning some hand quilting on the linen. 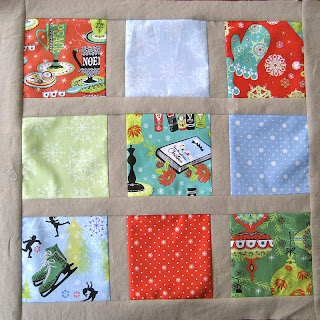 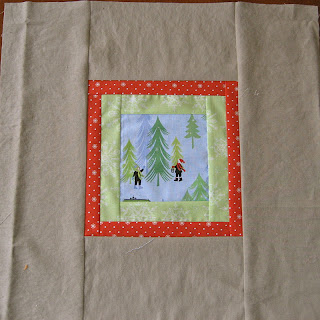 Oh, and one last thing to share.  You may have seen lots of buntings/penants/banners on the craft blogs lately, but I doubt you've seen one like this: 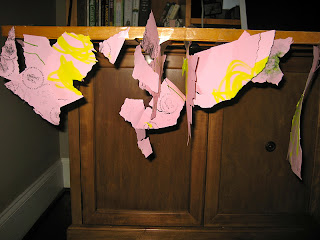 Yep, Will worked very hard to "decorate" my desk yesterday with pink paper, scrapbook scissors, a yellow highlighter and my return address stamp.  Oh, and tape.  Can't forget the favorite art supply of toddlers everywhere. It's so funny how my attempts at planning art never capture their attention as well as something they come up with.  He worked hard on this for nearly an hour!
Labels: 12 joys bunting charm squares christmas coasters kids art Linen piecing pin pinterest