A Century of Books {Banned Books}

Did you know that this week is Banned Books Week?

The list of banned books is staggering and surprising. It's difficult to imagine classics like 'Alice's Adventures in Wonderland,' 'James and the Giant Peach' or the 'Wizard of Oz' being labeled "unsuitable for children."  However, YA and children's books, as well as those by or about people of color, are the most frequently challenged.

In celebration of our freedom to read what we choose, I thought it would be fun to pick out some of the banned books I have read this year as part of my Century of Books Challenge.  Naturally, these are some of the most meaningful books I have ever read. 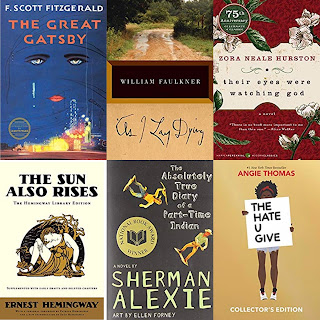 The Great Gatsby (1925)  This was a re-read for me, but I had not read it since I wrote my 11th grade English paper on the tragic heroes of F. Scott Fitzgerald. It was just as wonderful as I remembered. If you read it can you ever forget beautiful, silly, selfish Daisy and the all-seeing eyes on the billboard advertisement? This was banned for language and sexual references.

The Sun Also Rises (1926) I have read and enjoyed several Hemingway novels in the past few years and this is one of my favorites. The main characters were wonderful, but I found the lives of the bullfighters especially fascinating. This was burned in Nazi bonfires in Germany and banned stateside for profanity, promiscuity and general decadence of its characters.

Their Eyes Were Watching God (1937) This was another re-read for me that I hadn't touched since college.  I knew I really enjoyed it but couldn't remember any of the particulars (Oh, how I wish I had kept a book journal then).  I certainly won't be forgetting about the strong heroine, Janie, or her story, any time soon after this reading.

“The wind came back with triple fury, and put out the light for the last time. They sat in company with the others in other shanties, their eyes straining against crude walls and their souls asking if He meant to measure their puny might against His. They seemed to be staring at the dark, but their eyes were watching God.”

The Absolutely True Diary of a Part-Time Indian (2007) I was intrigued when I read that the main character starts a new high school where the only other Indian is the mascot. I read it in a day and did absolutely nothing else until I finished it.  It knocked me off my feet.  This has been challenged for profanity, sexual references and religious veiwpoint.

The Hate U Give (2017) I put off reading this book until this year because although I knew it would be good for me, I didn't think reading about a police shooting would be anything but something to suffer through.  This book was amazing.  It is so much more than the one incident. Many of the characters were so vivid I can recall a clear picture of them and how they interact.  This book was banned for profanity, sexual references, drug use and for being "anti-cop."

This post contains affiliate links, which do not cost you but may provide a small commission to me should you use the link to make a purchase, and for that I am most appreciative.


I would love it if you can share your most favorite banned book?


One last thing, won't you please go to the American Library Assocation's #ebooksForAll petition page? They do a great job explaining the importance, but in a nutshell MacMillan Publishers has decided to allow libraries to buy only one copy of a new e-book for the first eight weeks of release (regardless if it is the NY public library or the smallest town in the US).  Libraries already pay many times the retail cost of an e-book for the license to lend it out, one at a time, for a certain time period. It's worth checking out.