A Century of Books {Mystery & Thrillers}

Seven mysteries that will keep you turning pages but won't keep you up all night!

For 2019 I have challenged myself to read a book published from every year 1920-2019, a Century of Books (for more about this challenge, see this post). Although it seems I'm going to fall short of reading a hundred books this year, and am having a hard time resisting new releases, in many ways this challenge has been success.  Yes, it got me to read and re-read lots of books that have been on my TBR list forever, but it also introduced me to books I never knew I was missing!

This challenge has helped me to realize that I actually really enjoy a great mystery! 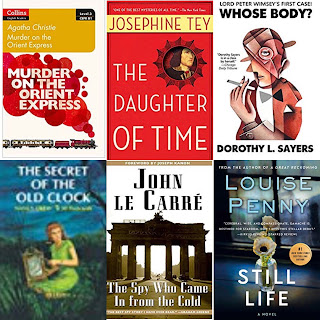 And Then There Were None (1939) and Murder on the Orient Express (1934): One of the first things I learned is that if you are having a hard time finding a book to read for a particular year, you can be sure Agatha Christie published something that will work!  Finding a copy in circulation is not always as easy.  I read And Then There Were None first and I was hooked.  I was mystified about the killer until the end and loved how it all tied up so neatly.  MOTOE wasn't quite as thrilling for me, but my expectations may have been unrealistically high! It was definitely still a great read.

The Secret of the Old Clock (1959): I said I wasn't much into mystery or spy novels, but looking back I adored Nancy Drew as a young girl.  Since the first one was published in 1920, it seemed like the perfect way to begin my challenge.  Unfortunately, after reading about the differences, I realized I was actually reading the cleaned up version of the book published in 1959.  I had no luck finding an original edition which seems a shame because apparently Ms. Drew was much less refined and charitable in the prior edition. It was an enjoyable read for nostalgia's sake, but Nancy's goody-two shoes act was slightly irritating.  I think the earlier version would have been much more fun!

The Daughter of Time (1949): Inspector Alan Grant of the Scotland Yard is laid up in a hospital bed and bored to tears when he comes across a portrait for King Richard III.  He can't imagine a man that looks so sensitive could have orchestrated the murder of the Princes in the Tower and sets out to solve the age old mystery.  I was super excited to hear about this title because of my love for British history and since it has been named the Greatest Mystery of All Time by the British Crime Writer's Association.  I can't promise that you'll agree with that statement but I don't think you'll be sorry you picked it up. (I've also heard rave reviews for the audible version read by Derek Jacobi).

Whose Body? (1923): This was a rollicking good mystery that had me baffled as Lord Peter Whimsy, amateur British-gentleman sleuth, cracked his first case: the identity of the body in the bathtub wearing only pince-nez.  I was really drawn to a lot of the characters here and could have read pages more about his quick-witted mother, among others.  This will definitely be a series I return to again.

Still Life (2005):  This is the first book in the Chief Inspector Gamache series, which Ann Bogel constantly gushes over.  It is also the latest publication year of the list, yet it feels delightfully old fashioned.  I liked most of the characters and especially the setting in a small town outside of Quebec, which helps place it in the "cozy mystery" subcategory, of which I'm now a big fan.  Definitely a series I'll be checking back in with!

The Spy Who Came in From the Cold (1963):  This is the oddball selection in this list, as it is truly in the espionage genre, but I hated to leave it out as I won't have a post on espionage novels any time soon and it definitely has a feeling similar to "who dunnit?" as you try to piece the story together.  John le Carre is perhaps most famous for Tinker Tailor Soldier Spy but this, his third novel, is what put him on the map.  Publisher's Weekly called it "the best spy novel of all time" in 2006. The backstory is as fascinating as the novel itself.  It was published at the height of the Cold War amidst a flurry of spy novels, but the public sensed his seemed just a little more authentic. Le Carre was actually a pseudonym used for David John Moore Cornwall of both MI5 and MI6,  His cover was blown shortly after publication of this book by the notorious British double-agent, Kim Philby, and he began to write full time.  The main character, John Smiley, was meant to be the anitdote to the gangster persona of James Bond.  Le Carre wanted to show what a sordid affair the East-West spying game was, but that didn't make it any less enjoyable.  The double crossing will keep you on your toes until the very end.  Another author I am most eager to revisit.

You tell me: what did I miss?  Any other great twentieth century mysteries I need to read?  Have you read any of these?  I'd love to hear what you think.


(there are affiliate links in the post.  They don't cost you any more, but may provide a small fee to me if you use them to complete a purchase, for which I'm very appreciative!)