Last year one of our homeschool friends set up a monthly book club.  She broke the club into two groups to accommodate kids who ranged from third grade through sixth.  That left several younger siblings who were happy with a play-date, but eventually they wanted their own club. I was the moderator for their inaugural meeting yesterday and I thought I would share some tips. 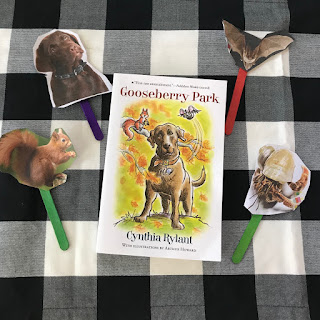 They don't have to read the book themselves. We have a group that includes kindergarten and first graders at various reading levels.  Some of them, my son included, aren't capable of reading a 100+ page book on their own.  This is when audio books or reading aloud by a parent come in handy.  They still can have a very rich discussion if they haven't "technically" read the book. I don't think any of the kids were even aware of which ones were able to read it themselves or who needed some hand holding.

Choose a fun book.  We picked Gooseberry Park and all the kids loved it.  I loved it too, which was great since I read it out loud : ).  Sean and I even picked up the sequel, Gooseberry Park and the Master Plan, at the library and are enjoying it just as much. For next month, we are reading The Mummy with no Name and Sean's brothers are pretty excited for him to start on the Geronimo Stilton series.

Serve a snack.  This isn't just a tip for younger kids, we like the snacks at my adult book groups, too!

Have a simple activity. I made a quick Word document with pictures of the main characters and printed one for each child.  They used scissors, popsicle sticks and washi tape to make little puppets. It takes six year olds longer to cut than I projected, which was great as I worried we would finish must faster than the older groups.  They served a dual purpose as we used them during our discussion.

A word about discussion questions.  If your goal is for the children to see how fun reading and talking about books with their friends can be you want to leave the literary analysis questions for high school and just let them talk about the story. For example, we had a great time and quality discussions with just some simple questions like, "Which character do you think was the bravest?" and "Which character is the most like you?"  They would hold up the popsicle stick puppet and take turns telling us why they chose that character.  It worked really well.


We ended our meeting with the question, "What part do you most want to remember?"

If you have any other questions for starting a book club for the little people in your life, or if you already have one and can share tips, I'd love to hear about it.
Labels: book club book club party childrens lit family family book club kidlit