How to Connect with your Percy Jackson Obsessed Child

Do you have a child in your life who constantly references the characters from Greek and Roman mythology as if they are your neighbors?  Do you find yourself trying to remember parts of the Odyssey from high school Literature Class so you can have some clue what they are speaking about?  Does a bookshelf in your home look like this? 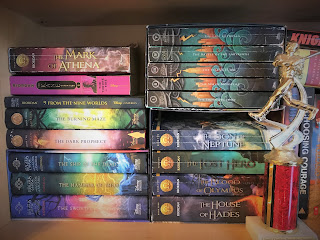 I can completely relate!  I thought there could never be a series that would capture the hearts and imagination of my boys in the way that Harry Potter did, but Rick Riordan gave me the surprise of my life.  My oldest son started reading the Percy Jackson series and couldn't come up for air.  Once he finished those five books, he raced through The Heroes of Olympus, The Trials of Apollo, and then The Kane Chronicles.  My middle son joined in on the fun soon after.

I was absolutely thrilled about this renewed voracity in reading. I was also a little worried. Despite my classical studies degree, I was floundering when they wanted to discuss the adventures of the Greek, Roman & Egyptian gods.  I don't know about you, but I didn't have the freedom in my schedule to devote a year or so of my life to reading everything Rick Riordan ever wrote. 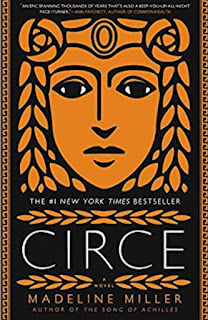 Circe (can be pronounced Kirkee in Greek, Sirkee-like circle, or sirsee) is best know as the witch from the Odyssey that turns Odysseus' men into pigs.  Miller gives Circe a voice in this beautiful novel.  Not just the defense that the men were invading her island with intentions of rape and pillage, but the full story of her life as a hard working, loving and independent woman.  Circe is a minor goddess sired by the Titan Helios and banished to a remote island by Zeus for turning her rival Scylla into the terrible monster that terrorized Greek sailors in the channel across from Charybdis.


You'll encounter so, so many of the characters your children talk about, but more importantly you'll be enchanted by this story of a life well lived.

Miller also wrote The Song of Achilles, which is in my To Be Read pile but I haven't gotten to it yet.  Have you?  What did you think?  I'm completely on board for retelling the stories of notorious women in history, often labeled witches, and I hope to see lots more in this vein.

(this article contains affiliate links, which do not cost you anything but may provide a small incentive to me if you click through and purchase.  For this I am most appreciative).