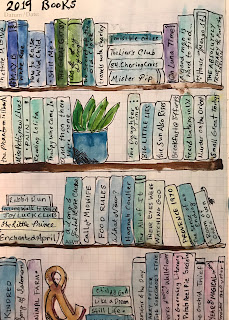 I had a really interesting reading year because of my Century of Books Challenge.  I'll give a wrap-up of that in a post next week but for now I just want to focus on my favorite ten books of the year.  Since I was reading books published from the last century, these are not new releases, nor are they in any order.  Without further ado:

The Absolutely True Diary of a Part Time Indian by Sherman Alexie - I read this in one day.  I distinctly remember reading it as I stirred a pot of pasta to get dinner on the table as easily as possible so I could resume reading.  It was not a day for chopping vegetables, but I can occasionally stir a pot of boiling water and pasta while I read. I just found his life completely fascinating.  It was really a sad story but it was also told with a quirky sense of humor that made me fall hard for Junior.

The Spy Who Came in from the Cold John LeCarre - Once upon a time I really loved a good spy novel but I had never read anything by LeCarre.  Set in Berlin during the Cold War, Le Carre wove a tale of duplicity and espionage that changed the whole genre.  I've been itching to get back to George Smiley since I put this down.

And Then There Were None by Agatha Christie-  I read a few Agatha Christie novels during the last year (because if you're looking for books published in any given year between 1920-1976 Christie wrote at least one), but this was my first and favorite. It has an amazing cast of characters with fascinating back stories.  I had no idea who the murderer was or how it happened until it revealed and it kept me turning pages.

Small Great Things by Jodi Picoult - This is a book that feels like it will stay with me forever.  Ruth is an African American L&D nurse whose world falls apart when the child of white supremacists (who requested she not touch their son) dies under her care. The story of how the characters got to this moment and how they move forward afterward is eye opening.  When experts talk about books building empathy in readers this is exactly the kind of book they are imagining.

Hannah Coulter by Wendell Berry - Another new author for me that I can't wait to read everything else he wrote.  Hannah is widowed before she even gets a chance to experience real married life when her groom goes off to fight in World War II.  She slowly finds love again in another Port William resident who comes home from the war.  The words are truly beautiful and because I found myself without my commonplace notebook, I took pictures of paragraphs with my phone.  I still have pages of photos describing the peaceful residents of Iwo Jima and the ravages unleashed there.  One of my favorite passages: “I began to trust the world again, not to give me what I wanted, for I saw that it could not be trusted to do that, but to give unforeseen goods and pleasures that I had not thought to want.”

Song of Solomon by Toni Morrison - In one of those odd coincidences, I was most of the way through this book when I heard of the author's passing.  This is definitely my favorite of her books thus far.  Milkman Dead's story is captivating and complex, but I really lived for the pages devoted to his aunt, Pilate. Born without a navel and gifted with healing abilities, she is at once feared and respected. She lives life on her own terms, in stark contrast to her brother, whose only concern is appearances.  Definitely one of my favorite characters of all time.

The Shell Seekers by Rosamunde Pilcher - I love a good multi-generational family saga and someone recommended this to me when I was 12 and had just finished The Thornbirds. Clearly, I'm a little behind on my To Be Read list. I am a big believer in reading the right book at the right time and I do believe it meant more to me at 41 than it would have at 12. I hope to read it again when I am much older and remember that at this age I hoped I would be just like Penelope Keeling.  This book has a lot to love: the bohemian artist community in Paris and Cornwall, wartime romance and gardening.

The Guernsey Literary and Potato Peel Pie Society by Mary Ann Schaffer - I finished this book a few days ago and am so mad I didn't get to it sooner.  I think the name put me off?  If it does the same to you, don't worry all will be cleared up in a few pages.  This is an epistolary, that is a book composed entirely of letters.  In 1946 Juliet receives a letter from a man on the Channel Island of Guernsey who has ended up with one of her old books and is politely asking if she'd mind trying to find him another book by the same author as the island bookstore has not operated since the war.  Her interest is piqued and she helps on the condition he tell her about the German Occupation of Guernsey and the Literary Society its residents form to help her with an upcoming article she is writing on the reading life.  Eventually she leaves London to visit her new friends and finds so much more there than the backstory for her book she went to research.

The Hate U Give by Angela Thomas - yes, I'm a little late to the party on this one.  And wow, it's a tour de force. Yes, it's about an African American teenage boy being killed by a police officer during a traffic stop, but it's also about the fallout in the community and how his best friend in the passenger seat, Starr, handles it.  Starr is never sure who she really is or even how she should speak.  At home her friends make fun of her for being smart and at the prestigious school she attends, she has to be careful not to sound too "ghetto." For a white woman like me it is very educational in that it shows the systemic effects of racism that people of color deal with every day in so many ways.  It's eye opening and heartbreaking and hopeful.  All the feels.

Harry Potter and the Prisoner of Azkaban by J.K. Rowling - After spending a great deal of our fall homeschool time on the Harry Potter series I really couldn't leave him out of this list.  It's been so long since I read them.  My husband's younger sister handed the first book to me and I only read it because I knew she'd bug me about it.  Well. the next day I had to go ask to borrow the second one and later the third.  Then I had to wait for Rowling to release more.  In the days before instant Kindle downloads, that meant dragging my fiance, and then husband, out to midnight release parties at Barnes & Noble after our date nights.  No, I didn't wear wizard robes, but I did stay up very late reading each night. It's been incredible to read them again and realize I wasn't just swept up in some craze, the books are really that good.  What a joy to be able to share them with my boys!

*The links in the post are Amazon affiliate links.  Your price is not affected but I may earn a small commission if you purchase using the links and for that I am very appreciative.