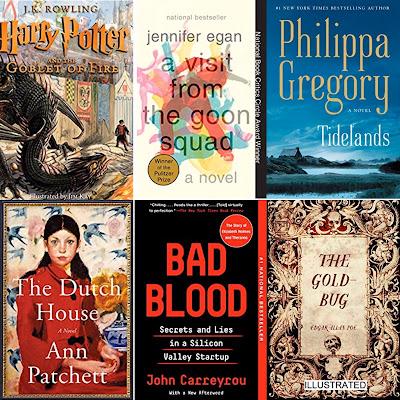 The Dutch House by Ann Patchett
This was the book I have been waiting to savor and it lived up to all the hype.  In my opinion, Ann Patchett is one of the best living writers and my very favorite. This one is going to be a re-read for sure because now that I know the plot and characters I want to focus just on her writing next.  It's descriptions like this one about Thanksgiving that just slay me: “The dinner was a huge production, with kids stashed in the den to eat off card tables like a collection of understudies who dreamed of one day breaking into the dining room.”

Bad Blood: Secrets and Lies in a Silicon Valley Startup by John Carreyrou
I rarely read Business Books, maybe I never actually have, unless you count the fascinating biography Shoe Dog, so I was surprised how quickly this sucked me in.  I read it because it was a selection for a book club I'm in and I really trust the hostess that selected it. I learned a lot about venture capital and startups and investigative journalism, but it's really a lot more than that.  It's about human nature and how far people are willing to go.  It's about how willing to overlook facts people are if they want something badly enough and someone is persuasive and manipulative enough to allay their concerns. I thought one of the most intriguing parts of the book was when the Steve Jobs biography came out and everyone was reading it in the office.  She had been dubbed "the female Steve Jobs" by the media and she was so eager to fit that role that her employees could tell what chapter of his book she was on by her actions and diet (she already had his wardrobe down).  I am really anxious to see how the trial for Elizabeth Holmes goes this summer.  It's clear she should be behind bars.

Tidelands by Philippa Gregory
I have been a long time fan of Gregory's prior works about female historical figures and was excited to see how her story telling style worked with an ordinary woman.  I think I prefer her books about queens and princesses slightly better (see The White Princess or Three Sisters, Three Queens).  Don't get me wrong, I did really enjoy this and I will be reading the next installment because I love nothing better than a multi-volume, multi-generational family saga and I think this series has a lot of potential.  I really liked the protagonist, Alinor, I was just so frustrated by the way she was treated by the people around her.  Of course, I'm pretty sure this was the intention and true for how any single woman would be treated at that time, especially a midwife/herbal healer.

The Gold Bug by Edgar Allan Poe
I have read a lot of poetry by Poe and have frequented Sullivan's Island, SC where this book takes place.  In fact, I've long admired the shimmering gold bug mosaic in the sidewalk entry to Poe's Tavern.  So why haven't I ever read this short story? It is everything you want in a short story.  Warning: the ex-slave Jupiter is treated as the comic relief with awful stereotypes in dialect and intelligence, but he is a warm and important character. The cryptography and treasure hunt combine with the atmospheric setting of the quiet, winter island for a very cozy read. Definitely give it a read.

A Visit from the Goon Squad by Jennifer Egan
I saw this pop up on a lot of "best reads of the decade" type lists and thought I should give it a try.  I really liked the story, which centers around Bennie, a washed up punk rocker and record exec, and his most valued employee, Sasha. It was really intriguing to go back in time through their lives and see how each new character was related to their stories.  The puzzle pieces would slide into place a few pages into each chapter. I really enjoyed this one and can see how it made all of those lists.  It's really told in a unique way and executes perfectly on the idea.

Harry Potter and the Goblet of Fire by J.K. Rowling
I read this one out loud to my three boys and as I've mentioned here before, it is such a joy to revisit this series.  I was a little worried they wouldn't hold up as well in real life as they do in my memory, but honestly, they're even better.  I read a lot more and a lot more widely than when I first picked them up, but they are every bit as engaging.  I love these later books in the series as Harry and company really come into their characters.  It's also an added to delight to read these illustrated copies and I can't wait for the next one to release!

*The links in the post may be affiliate links.  Your price is not affected but I may earn a small commission if you purchase using the links and for that I am very appreciative.
Labels: #26bookswithbringingupburns monthly roundup reading life