I know this is just a bit early, but I was planning to share a little something I was thankful for tomorrow.  Of course there are a lot of other things I am thankful for that are not so shallow and materialistic as this, but I am thankful for a sewing room.  It is small, but it has a door and if I want to play with scraps at night until I am too tired to clean them up I can close that door and no one cares. 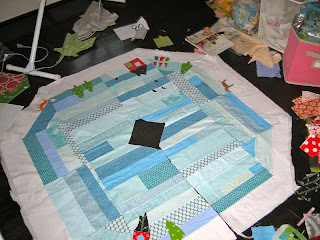 I'm also thankful we don't put up our tree until much later, as this skirt still needs quite a bit of work!

But then, I had a special delivery from my mother--in-law who just visited my sister-in-law in NYC and stopped in at Purl Soho.  So I had to expand my little list to also include a mother-in-law who knows I'd rather have a souvenir of fabric bundles than Chanel (that's why she put that ribbon on)! 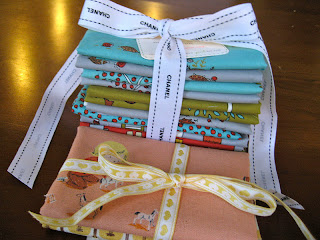 Lastly, we had a little playdate.  The weather is beautiful and I suggested we all take a little walk.  My last words to the kids as I slipped in the house to get the dog's leash: "Don't open the gate." Then I heard "Bettis got out!"  So with four children in tow, we attempted to call him back.  But they ran after him and I think he thought it was some kind of game because then he just bolted.  Trying to leave 4 small children on a sidewalk while I was trying to run through backyards didn't work.  Luckily, their mother, a dear friend, came back and we each took a car load of kids to look for him.  Finally, after about 30 minutes of driving my friend spotted him, and eventually he jumped right in my back tailgate.  Here is the little rascal, all worn out from his big day out. 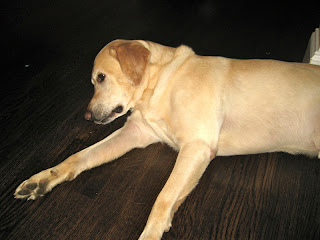 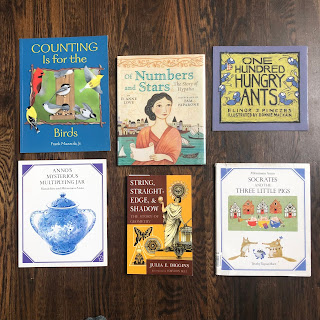