I am finally finished with my final project from Rachel's amazing Curves Camp!  I don't think it should have been (because when I finally got it right, it really wasn't difficult at all) but this project was a major headache for me.  Here is the finished project and then I'll give you the scoop on what went wrong: 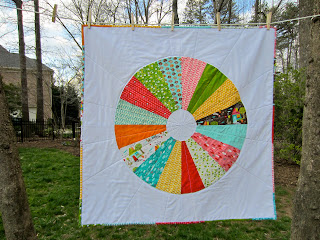 1.  First I cut the wedge pieces out from my precious mini bundle of Liberty fabric.  About the same time Rachel mentioned she didn't think it held up well in quilts, especially when mixed with other weight fabrics, I realized I lost a quadrant.  After hours of searching through my sewing room I gave up and decided to break into my fat quarter bundle of Woodlands by Khristian Howell (and added a few pezzy prints to make the 16).  They are super soft, by the way, almost Mendocino - soft! 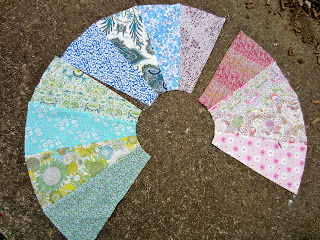 2.When it came time to make the background wedges from 20" squares of Kona white, I cut the arc 1/2"smaller than I was supposed to, so they would not fit with the wedges.  I told myself, no big deal, Kona is cheap as far as fabrics go and I bought extra to use for snowballs, so I could cut the tiny squares from these wasted pieces and use some more yardage.

3.  For my second set of background 20" squares I forgot to cut the selvage off first, so it was included in the 20" squares.  Again, told myself I could very easily cut tiny sqaures from these nice, whole squares.

4.  For my third set of background squares I must have cut the template off a bit, as all 4 pieces would not lie flat.  I completely seam ripped each one 3 times and tried various ways of pinning, not pinning to get the curve right.  Eventually the white pieces were so stretched and I was worried about the fabric not making it through another round of seam ripping.

5.  I went back to those squares with the selvage still on and trimmed them to 19" squares.  I very carefully cut my arcs and darn it if all four quadrants didn't come out nice and flat on the first try with no pins or seam ripper required!

6.  Quilting went fine until I decided to go around the center of the white circle but had my stitch length set to about .7.  Was having a heck of a time going around and couldn't figure out why until I completed the circle and took out the mess to see those teeny stitches.  Wow, that was another battle with the seam ripper, but it had to be done, it was not even close to round!

7.  Hoorah - quilted and bound.  I didn't have enough of any fabric I used to make the binding, so I did a scrappy binding of all the fabrics and I sewed it on by hand, because I was not taking any more chances : ) 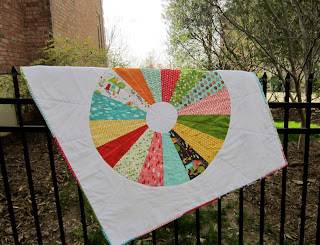 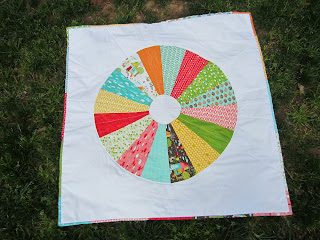 Am I alone here, or has anyone else recently made something a bit more difficult than it had to be?