Weekly Journal: the one about Ann Patchett 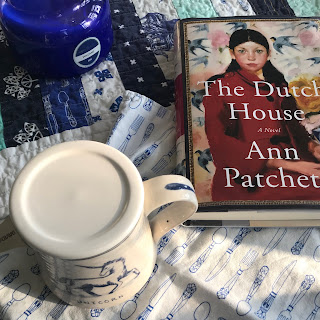 What I can't stop thinking about: I just finished the Dutch House by Ann Patchett, one of my very favorite authors and it was as amazing as I dared to hope.  One thing that is just blowing my mind is Kate DiCamillo's role in the ending.  Kate was recently a guest on the What Should I Read Next Podcast (Episode 213) and Anne mentioned that when Ann Patchett spoke about her process of writing the book, she said Kate wrote the last paragraph for her when she was stuck.  The crazy thing was Kate had not even read the book. The crazier thing is Ann used it.  Anne asked if it was really true and Kate said,

"Yes. This is what happened. We were at the beginning of our friendship. She's like, I'm working on a novel. And I said, I'm working on a novel, too. She said, what's your novel about? I said I can't tell you or my teeth will fall out. [ANNE LAUGHS] And that goes back to process because she and I worked very differently, and then she said, you know, that she was struggling I think, she said that she was struggling with the ending. And I said okay, well, tell me the - the main character's name and tell me the title and I'll write an ending for you. And she said from the beginning, I think I'll use this. And I'm like, oh come on! [BOTH LAUGH] No you won't."

KATE: Yeah! I was just like, you know, I just I wrote a paragraph knowing the title, knowing the character, and knowing that I was writing to a literary hero of mine that I was just starting to become friends with, and I never in a million years thinking that, you know, she was going to use it. But she said from the beginning, I think - I think this is it. I think this will work. And I just thought she was kinda pulling my leg, but consistently, and then I got to read the novel in manuscript and there it was."

Is that not the most amazing thing ever? So now that I read it, I think I may have to get the Audible version and have Tom Hanks read it to me.

Another thing I can't stop thinking about: This amazing artifact which is a testament to both love and horror.  It's heartbreaking in its beauty.

What I'm watching: The Marvelous Mrs. Maisel season three. It's not quite as good as The Crown, but we finished that and I'm happy to see her standup routines as much as her apartment, wardrobe, hair styles and exercise classes again.  It's the Sixties, Man!

What I'm cooking: Buttermilk roast chicken.  We had it Monday and I'm going to have to make it again this week.

“And so I made the decision to change. It might seem like change was impossible, given my nature and my age, but I understood exactly what there was to lose. It was chemistry all over again. The point wasn’t whether or not I liked it. The point was it had to be done.”
― Ann Patchett, The Dutch House


*The Amazon links in the post are affiliate links.  Your price is not affected but I may earn a small commission if you purchase using the links and for that I am very appreciative.  The other links are not sponsored in any way.