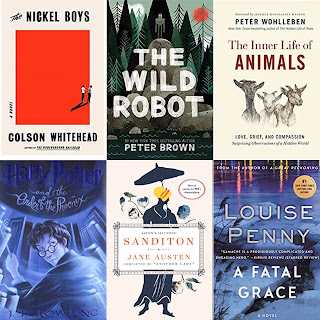 The Nickel Boys has been on my list to read since it was published, but when it showed up on President Barack Obama's favorite reads of 2019 list, I knew I had to get on it.  I was dreaded what I was sure was to be a horrific story.  It had plenty of unpleasantness (it's not graphic although there are many atrocities) but it wasn't nearly the horrible reading experience I was dreading.  It has moments of hopefulness and a great ending with a shocking twist.  Definitely bump this to the top of your pile if you've been thinking about it.

The Wild Robot was our family read aloud for school this February.  I had no idea what to expect and, frankly, thought it sounded like a really weird premise.  But, it has gotten a lot of hype and there was an Arrow guide for it.  A robot named Roz washes up on a remote island and all the animals are terrified of her.  She is able to learn about the world around her and figures out how to communicate with the animals, but they won't get near her - until she adopts a baby gosling.  It's a really touching story and I was surprised how invested in it I became.

Somehow I discovered that Peter Wohlleben had written another book, The Inner Life of Animals, and since I was a huge fan of his debut, I immediately picked this up.  It was really good because I find his story telling approach to science very appealing.  It did not make my head explode in the way the first book did, but I learned a lot and was thoroughly entertained by the animal anecdotes.

The Order of the Phoenix was amazing.  Gosh, it is so fun to read these books again and I totally forgot how they just keep getting more intense. We spent many a homeschool morning reading an extra chapter of this because all four of us just had to find out what happened next, even though three of us have already read it at least once.  Also, I've had a couple questions about counting children's books in my book count.  No, I won't count a picture book, but you better believe that an 870 page novel I've read out loud is going in the count! A 200 page one works as well, too, imho.

I was so looking forward to Sanditon. I had never even heard of it until I saw the previews for the Masterpiece series and then I just had to get my hands on it.  It was delightful to be back in Jane Austen's world, but it was so brief! I mean, I knew it was an unfinished novel, I just didn't understand how unfinished.  I feel like I was just starting to get a glimpse of all the players when it abruptly ended.  Luckily, I got my JA fix seeing Emma this weekend and that was perfection.  Really quirky, a very interesting soundtrack, amazing scenery, gorgeous houses and costumes, in short, delicious.

Oh, I just had to return to Louise Penny and her Inspector Gamache series with A Fatal Grace.  I fell in love with the delightfully odd inhabitants of Three Pines last year and knew I'd be revisiting this series in 2020.  I'm going to try to limit myself to one book from the series a month.  This is definitely more cozy mystery than thriller, which suits me just fine.  Despite all the murderous happenings, I have daydreams of visiting the Quebecois village: staying at Gabri and Olivier's B&B, shopping at Myrna's bookshop and stopping in for a croissant at Sarah's Boulangerie.

*The links in the post may be affiliate links.  Your price is not affected but I may earn a small commission if you purchase using the links and for that I am very appreciative.