This past Tuesday I took the boys to Isle of Palms, SC for one last hurrah.  We are very fortunate that my parents keep inviting us back (they have a partnership there where they get four weeks a year).  Fall is always my favorite season to be at the beach, but I was a little worried as the forecast called for thunderstorms every day we were planning to be there. 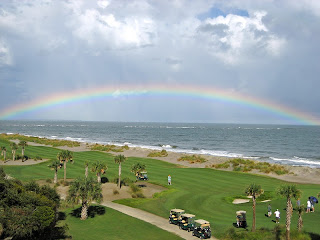 We did get some rain, but it never lasted long and the time on the beach before and after it was perfect.  This was the view from my parents' balcony Friday afternoon.  I wish I was a better photographer; I didn't do it justice.

It does remind me of something funny Will said.  My dad came home from golf and told the boys he saw three alligators on the course.  Will said, "Wow, Pap, I didn't even know they could golf!"  I just love the things nearly-three year olds come up with.

These pictures are from Tuesday night.  As soon as we arrive we have to go right to the beach.  Nothing like sand in the toes. 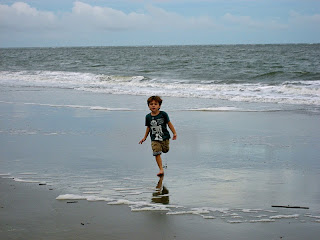 This was the first time Jack really loved being in the ocean.  He had a blast jumping waves and swimming.  It took a while for him to get over my stingray incident.  I guess seeing your mother lying on the sand with a stream of blood running from her foot will do that.

Andrew and I celebrated nine years of wedded bliss on September 21.  He wasn't able to join us at the beach until Thursday evening, but my parents watched the boys on Friday so we could celebrate. 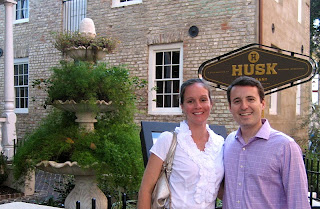 We ate at Husk in Charleston.  It was named "Best New Restaurant in America 2011" by Bon Appetit. They live the farm to table philosophy and I just love that. We could not get a reservation.  When we walked up to the hostess stand she was telling another costumer that Chef Sean Brock was filming another Food Network special, so I figured our chances were pretty slim.  Lo and behold she told us she could get us a table in an hour.  We could go to the Bar at Husk next door and our waitress would let us know when our table was ready.  The Bar is behind us in the picture.  A very modest, yet very cool old brick building with a lot of atmosphere and a killer cheese plate. 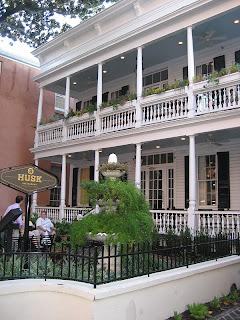 When our table was ready we were delighted to sit on the second story porch.  Notice they have the aqua ceiling which my own screened porch should have any day now.  If you've never been to Charleston or have heard of this "haint blue" you ought to take a look here.  I don't recall when I first learned about the haint blue porch ceilings, but it was when I was a child so I was a little surprised a the lack of information on it out there in cyberspace.

The food was, of course, fabulous.  Andrew wanted me to include the dessert picture.  Mostly because when it arrived I said, "glad we're not hungry!" 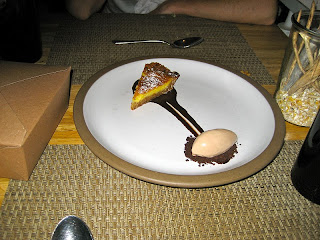 It was oatmeal pie with a custard filling and a side of peanut butter chocolate ice cream.  Divine, but quite small.  Due to the previously mentioned cheese plate at the bar, it's diminutive size was rather welcome.

Oh, and I did not bring patterns to cut out with me this time.  Mainly because I still haven't sewn half of that stuff together!  This time I brought Farmer's Wife Quilt-a-long templates, a mini cutting mat, zip-locs and fabric to try to get a few blocks cut out. 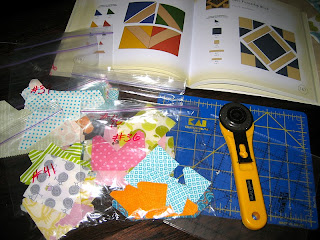 Something about seeing directions for cutting out 20 little triangles (and that's just in one fabric selection) has made me cringe about making the next couple blocks.  But I got about 5-6 cut out and, for me, that's always the tough part!