This post title is dedicated to my mom, who spent a great deal of my childhood coming in to dimly lit rooms to find me straining my eyes while trying to read, draw or cross-stitch.  She would always say, "let's shed some light on the situation" as she flipped a switch on.  Naturally, I do the same thing to my children now.  Which makes me wonder who started this tendency?  Some great-great-great grandmother with a candlestick?  Anyway...

We had an electrician over this week to wire the porch for fans and cans, so I took full advantage of him (and his ladder).

After updating the kitchen this spring, I had been obsessed with the fact that every picture of an island I've seen since then has pendant lights above it (thanks, Pinterest).  And our cans were lined up for the old and much smaller island, which looked really weird. 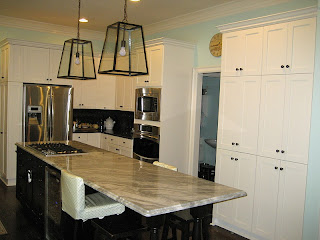 These are the Medium Elridge Pendants from Ballard.

I am still in search of barstools, after that fiasco.  And now there are holes in our ceiling where the cans used to be.  Someday.  Someday it will all be together.

Here's what the electricians actually came for: 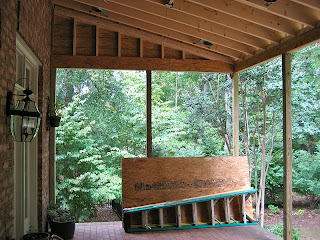 We're getting to the home stretch, just need an inspection, some tongue & groove, trim, gutters, screens and a lot of paint.  That doesn't sound like almost finished to me, but they tell me that is the easy stuff.

Here's what we borrowed the ladders for.  Our ceilings are 11 feet and our own ladder is 6 feet. 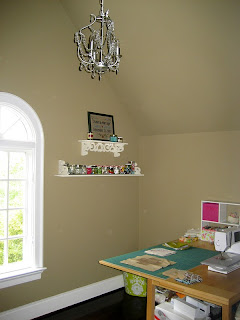 This is my little sewing studio.  It's pretty much why I wanted to buy this house.  I remember seeing this little room off the playroom when the realtor showed us around. I could hardly breathe, and I barely saw the rest of the house, I was so trying to figure out how to convince Andrew that this house was the one!

Someday I will show you the other two walls.  Someday!  It will involve a lot of cleaning (or de-stashing - ugh).

Andrew bought me this little chandelier from Ikea for the holidays and it has sat in a box ever since due to the ladder dilemma.  As soon as we realized the workers left the ladders over the weekend we got to work.  It replaced a florescent with broken housing.  Big improvement.

Lastly, we got rid of this chandelier that I've been wanting to change out since we moved in over two years ago.  Sharp metal tassels just aren't my style (neither are swirly finials - next project). 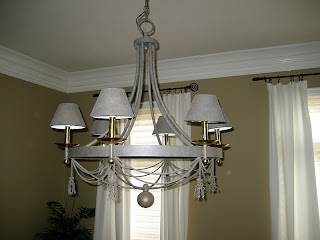 I had wanted an antique french looking chandelier but had only found one I really like at about $3,000, so I settled for the next best thing.  The Mariestad from Ballard.  Bad picture & I still need bulbs, but I like it! 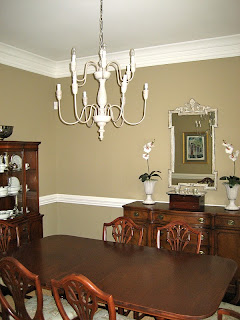 Oh, and you might think Ballard is sponsoring this post, but they're not (unfortunately!).  I just shopped around a lot and found these to be a good compromise of looks and price.

These are the last new lighting bit.  Sconces I've wanted for about a year now.  So simple, but I love them. And if it's not too weird would like another set for in the family room! No electrician needed for candles... 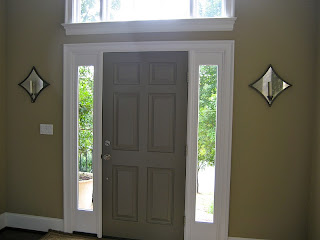